Moving Beyond the Impossible: Challenges of cellular agriculture

Martin Rowe is the co-founder and publisher at Lantern Books. For the last three years, he has followed the development of a new generation of plant-based meat and dairy analogues, as well as that of cultured or “clean” meat. Drawing on research encapsulated in his paper, Beyond the Impossible: The Future of Plant-based and Cellular Meat and Dairy, which he wrote for Brighter Green and the Vegan America Project, Rowe notes some of the challenges accompanying these developments in the food, environmental, and technological spaces. 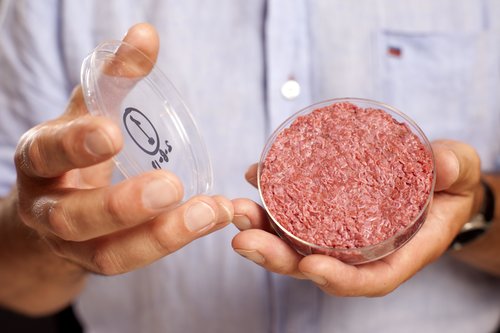 In September 2019, San Francisco- and London-based think tank ReThinkX published Rethinking Food and Agriculture 2020–2030, which describes the disruptions that innovations in microbiology and cellular technology will bring to protein. Cultivated (a.k.a. “clean” or “laboratory-grown”) meat and dairy, refinements of current plant-based analogues, and the use of enzymes in “precision fermentation” of animal-based proteins will, the authors state, radically disrupt current animal agriculture.

A decade from now, Rethinking suggests, the U.S. market for ground beef will have decreased by 70 percent, steak by 30 percent, and dairy by nearly 90 percent – not because of a fall in demand for these products, but because it will have become possible to produce them with cellular technology instead of livestock. The number of cows in the U.S. will have been halved, as will revenues from the beef and dairy industry (to $200 billion). By 2030, the report surmises, the U.S. dairy and cattle industry will have collapsed; five years beyond that it will consist only of specialty farms. The disruption won’t be limited to cattle, the report adds: “All other livestock, aquaculture, and commercial fisheries will follow a similar trajectory.” Furthermore, “the knock-on effects for crop farmers and businesses throughout the value chain will be severe.”

ReThinkX paints a scenario of breathtaking change: significant reductions in greenhouse gas (GHG) emissions from animal-based food production; much lower water usage; drastically reduced (mis)use of antibiotics; a radically decentralised (cultivated) meat production system; and the opening up of land in the U.S. the size of the Louisiana Purchase (435 million acres), which could be used for carbon sequestration through reforestation, the report suggests.

As an ethical vegan and environmentalist of almost thirty years, and a publisher of books that attempt to alert, inform, and persuade people of animal-based agriculture’s effects on animal welfare, the environment, public health, and the climate, I’m buoyed by predictions such as those from A. T. Kearney, Lux Research, or Zoe Leavitt. Yet I’m also wary of such visions of the “next great revolution in food production”, as the ReThinkX report calls it, for several reasons.

First, all such trajectories depend on a swift resolution of outstanding problems, both technological and social: a cheap and widely available non–animal based medium in which to grow cell tissues; a production process engineered to deliver large amounts of consistent protein at scale; regulatory alignment with current animal products; and widespread customer acceptance of bioengineered food items. Further assumptions are that the costs of ingredients and production will continue to fall at least to parity with their animal-based equivalents, and that the manufacturing of alternative proteins won’t require unforeseen, additional costly adjustments or further ingredients.

Secondly, as I observe in Beyond the Impossible, my policy paper on the current state of the plant-based and cultivated meat industries, beyond these formidable technological and engineering challenges, some scientists and environmentalists worry that not enough research has been conducted and that not enough of it is open source. They fear that companies, driven by their investors to maximise profits and patent essential processes, will compromise developmental technologies and bring a product to market prematurely, even recklessly – particularly regarding consumer safety and acceptance.

A third reason is to be cautious about the timeline. To be sure, plant-based meat analogues have seen double-digit growth in the last two years; plant-based milks already constitute 13 percent of the U.S. dairy market. However, the former remain around one percent of the animal-based meat market, cultivated meat has not yet been commercialised, and cellular egg and dairy items are only just entering commercial production. Current trajectories of meat consumption and production worldwide continue upward; Americans were forecast to eat more meat in 2018 than ever before. China recently finished building a farm in Vietnam that will raise 300,000 pigs annually, even as swine flu threatens to wipe out a quarter of the world’s pig population.

So, although it might indeed be the case that the planet is at “Peak Beef,” animal-based meat production shows no sign of slowing, even as scientists and policy forums urge the reduction of such meat consumption and publish report after report on the role of animal agriculture in antimicrobial resistance, zoonotic diseases, biodiversity loss, greenhouse gas emissions, habitat destruction, eutrophication of waterways, air- and water-borne pollution, as well as animal welfare violations.

This raises a fourth caveat. With so much invested in the current system, whether financially, politically, or conceptually, governments and Big Ag may be very resistant to change despite clear evidence of the negative effects of industrialised animal agriculture enumerated above and the opportunities provided by precision fermentation to address them. Although it’s true that Perdue, Tyson, Cargill, Nestlé, and JBS are developing plant-based analogues and/or investing in cellular start-ups, representatives from these “protein providers” show no inclination to rein in animal-based production. Indeed, meat scientists quoted in Beyond the Impossible describe a “win-win” situation where plant- and cellular products complement an expanding portfolio of animal foods, adding value to lines by extending the shelf life through blending ingredients, and allowing growth to meet the demand for animal-based protein into the latter half of the twenty-first century.

A fifth concern arising from RethinkX’s report is found in its description of the decrease in the financial value of farmland. Small farmers – buffeted by the tariff wars that squeeze the already tight margins they operate under, and caught within the debt spiral of overproduction (in the case of dairy) and industry consolidation – are struggling, some ending their lives as the communities around them also die. Of course, the numbers of workers in agriculture have been declining for a century because of technological advances, urbanisation, and industry consolidation. These, in tandem with climate change’s predicted irregular rainfalls, devastating wildfires, and increased heat stress lowering cattle and plant productivity, will further reduce farm employment, strain ecosystems, and tighten margins with or without the plant-based or cultivated meat revolution.

That said, if the future is bleak for farming now, leaving technology, market forces, and efficiencies of scale available to multinationals to guide the future would seem a recipe for more instability. Rethinking Food and Agriculture barely touches on the real-world sociopolitical consequences of collapsing land values, plummeting commodity prices, billions of dollars of stranded farm assets, and the one million agricultural jobs that will vanish by 2035. Nor does it reckon with the entrenched interests of Big Ag, and their consolidated power over politicians. According to a Washington Post article on November 4, JBS, the Brazilian food giant, received $78 million in pork contracts from the U.S. government, as part of the U.S. bailout of farms. What’s to stop the multinational “protein providers” from continuing to dominate the new agricultural revolution much as they have the old one?

The ReThinkX report estimates that 700,000 jobs will be created in the new food system, and suggests debt-relief and social safety-net programs could be established to help family farmers transition to other means of production, such as cultivated meat or its feedstock, or leave the business altogether. But this response feels tepid. Food can’t simply be viewed as calorie and protein conversion; nor is farming merely the supply of units of production (aka animals), biofuels, and commodity crops in a vertically integrated system that ignores the concerns of communities that produce and consume their products. True, the ReThinkX report emphasises the importance of protecting people, “not companies or legacy industries,” but a bigger vision is required.

In Beyond the Impossible and other writings for the Vegan America Project, I suggest that we need a more imaginative vision of agriculture, one that: replenishes the soil through the polycropping of a much wider variety of plants and grains; offers bioregional fermentation of cultivated proteins; and frees up land for rewilding, reforestation, renewable energy generation, carbon sequestration, and biodiversity. This agriculture could offer communities sustainable livelihoods through direct subsidies, tax abatements, and carbon credits while simultaneously integrating nature’s services into economic value chains.

Bioremediating land and watersheds would also create diversified ecosystems that could provide test-runs for resiliency strategies as the climate crisis deepens. Restorative justice models might likewise diversify ownership of the vast acreage freed by meat fermentation to include First Nations and people of colour from whom land was stolen over the centuries.

If some of these ideas may seem as fantastical and drastic as the scenarios outlined in Rethinking Food and Agriculture 2020–2030, they nonetheless pale in comparison with the dire consequences already forecast for our planet and its inhabitants if business-as-usual continues. In such circumstances, policy solutions to avoid social breakdown need to accompany the breakneck pace of technological “advancement” before the only change that occurs is catastrophic.

We're keen to hear your thoughts and comments. To join the conversation, either send a message to the FCRN's Google Group (join here) or use the comments form below.