This paper, co-authored by Table member Francesca Harris, calculates the ground and surface water use associated with cereal traded between states in India. It uses a new modelling method based on supply and demand data to quantify sub-national food flows in the absence of relevant food trade data. It reports that 154 km3 of water travels between Indian states through the trade of cereals each year. 41% of the cereals traded are produced in states with over exploited groundwater.

Harris writes: “There are increasing concerns over groundwater depletion in India, particularly in the Northern states of Punjab, Rajasthan and Haryana. If this water runs out, it is not clear whose food security is at risk, as there is very little data on the sub-national movement of food in India. This study highlights that 31 out of 35 states are partly consuming cereals that have been produced with over-exploited groundwater, equating to 76% of the Indian population. Groundwater depletion is not just a problem for the states experiencing it, it is a national problem for India. Interventions are needed that reduce dependency on these resources, for example diversifying production location and crop type, as well as improving irrigation efficiency.”

Cereals are an important component of the Indian diet, providing 47% of the daily dietary energy intake. Dwindling groundwater reserves in India especially in major cereal-growing regions are an increasing challenge to national food supply. An improved understanding of interstate cereal trade can help to identify potential risks to national food security. Here, we quantify the trade between Indian states of five major cereals and the associated trade in virtual (or embedded) water. To do this, we modelled interstate trade of cereals using Indian government data on supply and demand; calculated virtual water use of domestic cereal production using state- and product-specific water footprints and state-level data on irrigation source; and incorporated virtual water used in the production of internationally-imported cereals using country-specific water footprints. We estimate that 40% (94 million tonnes) of total cereal food supply was traded between Indian states in 2011–12, corresponding to a trade of 54.0 km3 of embedded blue water, and 99.4 km3 of embedded green water. Of the cereals traded within India, 41% were produced in states with over-exploited groundwater reserves (defined according to the Central Ground Water Board) and a further 21% in states with critically depleting groundwater reserves. Our analysis indicates a high dependency of Indian cereal consumption on production in states with stressed groundwater reserves. Substantial changes in agricultural practices and land use may be required to secure future production, trade and availability of cereals in India. Diversifying production systems could increase the resilience of India's food system. 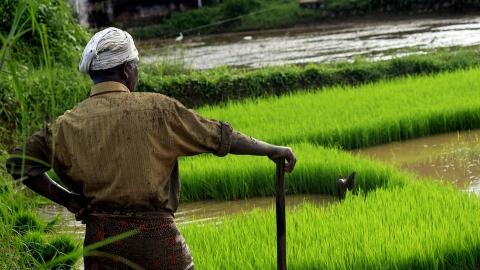