Over the past half-century, the paradigm for agricultural development has been to maximize yields through intensifying production, especially for cereal crops. But achieving food security and building a healthy, resilient global food supply is about more than just the quantity of calories provided. New metrics of success and methods of evaluation are needed in order to measure progress towards meeting the world’s nutritional needs within environmental limits.

This study provides an applied example of how this might be done using the concept of ‘nutritional yields’, applied to a case study of cereal crops in Central India. Using this approach, the goal is to maximise the synergies and better understand the tradeoffs between a suite of agricultural production objectives, in order to promote the efficient use of land to produce nutrients for human consumption, climate resilience, and income for farmers.

Four crops were analysed (sorghum, rice, small millet, and maize) with nutritional yields for protein, energy, and iron calculated, as well as the sensitivity of yields to changes in monsoon temperature and rainfall as a measure of climate resilience. Nutritional yield combines data on average crop yields in the region as well as their average nutritional content.

The nutritional yield metric estimates for each crop and nutrient within the study region:

The graphic below shows the nutritional yield results for the crops analysed, as well as their inverse, which is the number of hectares required to provide a sufficient quantity to fulfill 100% of the dietary reference intake for a nutrient for one adult.

Yield sensitivity was based on regressions of recorded yields against a variety of temperature and rainfall datasets. These metrics and those for nutritional yields were also combined with metrics comparing the economic performance of different crops (market price, and the minimum support price set by the Indian Government), to assess the different impacts of farmer income.  The results are compared in the graph shown below.

What is shown by the analysis, is that no single crop is superior for all objectives in the study region considered. Or to put it another way, there are tradeoffs to be made between them in terms of nutrition, climate resilience, and economic benefits for farmers. Which to prioritise is ultimately, not a scientific question. However, through empirical evaluation of this kind at the regional level, households, communities, and regional administrations can use this type of information to make informed choices about which crops or crop mixes to use, in order to achieve their priorities from agricultural production - moving beyond just quantity produced.

This type of analysis is also able to raise some interesting questions about production decisions. In this particular region, iron deficiency is likely to be widespread and so an increase in sorghum production and consumption, would be a more efficient use of land to address this problem than rice.

Moreover, while being the dominant monsoon crop, rice in the study region has poor yield compared to other regions, is the least resilient to precipitation change, has the lowest nutritional yields of all cereals for iron, and the lowest for energy beside very low-yielding small millet. Overall, maize and sorghum perform well but were sown on only 12% and 9% of area used for monsoon cereals in the study region, while rice was sown on 70%. Exactly why maize and sorghum haven’t been more widely adopted in this region, when the results of this study indicate that they could contribute to nutrition and climate resilience, is an interesting and open question.

With any such analysis trying to combine multiple metrics, there are limitations according to data availability, data quality and representativeness, and which metrics should or should not be considered. Which set of tradeoffs are preferred by which stakeholders, adds a further subjective element to the interpretation of findings.

What this study shows is that it is possible to move beyond production quantity as the only metric for judging the optimal use of land, and to use a wider suite of metrics for land use planning, including those for nutrition, which are essential for addressing malnutrition burdens.

Sustainable agriculture has multiple objectives, including efficient use of land to produce nutrients for human consumption, climate resilience, and income for farmers. We illustrate an approach to examine trade-offs and synergies among these objectives for monsoon cereal crops in central India. We estimate nutritional yields for protein, energy and iron and examine the sensitivity of yields to monsoon rainfall and temperature. Rice, the dominant crop in the region, is the least land efficient for providing iron and most sensitive to rainfall variability. Sorghum and maize provide high nutritional yields while small millet is most resilient to climate variability. Price incentives are strong for rice. No single crop is superior for all objectives in this region. Instead, understanding which crops, or combinations of crops, are most suitable requires identifying household-, community-, and region-specific priorities coupled with empirical analysis that considers multiple objectives.

Also see the previous perspective paper ‘metrics for land-scarce agriculture: nutrient content must be better integrated into planning’ here, upon which this research builds. 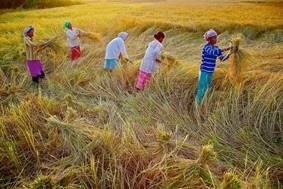