A study on the impact of climate change on fish stocks by scientists from the UN Environment Programme World Conservation Monitoring Centre (UNEP-WCMC) has identified ocean hotspots for fish extinction and a link between rising temperatures and fish movement.

The UNEP-WCMC is the specialist biodiversity assessment arm of UNEP. Using the climate change scenarios of the Intergovernmental Panel on Climate Change (IPCC), the study finds that fish, as a result of warming oceans, may move away from their present-day habitats. The results of the study indicate an average shift towards the North and South poles across species at a rate of 15.5 km per decade in a low emissions scenario (ocean warming at 1°C) and 25.6 km per decade in a high emissions scenario (ocean warming at 3°C). According to UNEP-WCMC, the results are consistent with changes over recent decades.

The study's distribution shift predictions also suggested that local extinctions would be concentrated near the equator. According to the lead author of the study, Miranda Jones, Programme Officer at UNEP-WCMC, the movement of fish to cooler waters generates new opportunities for Arctic fisheries, but could disrupt current species and increase resource competition, especially for countries closer to the equator.

Species distribution models (SDMs) are important tools to explore the effects of future global changes in biodiversity. Previous studies show that variability is introduced into projected distributions through alternative datasets and modelling procedures. However, a multi-model approach to assess biogeographic shifts at the global scale is still rarely applied, particularly in the marine environment. Here, we apply three commonly used SDMs (AquaMaps, Maxent, and the Dynamic Bioclimate Envelope Model) to assess the global patterns of change in species richness, invasion, and extinction intensity in the world oceans. We make species-specific projections of distribution shift using each SDM, subsequently aggregating them to calculate indices of change across a set of 802 species of exploited marine fish and invertebrates. Results indicate an average poleward latitudinal shift across species and SDMs at a rate of 15.5 and 25.6 km decade−1 for a low and high emissions climate change scenario, respectively. Predicted distribution shifts resulted in hotspots of local invasion intensity in high latitude regions, while local extinctions were concentrated near the equator. Specifically, between 10°N and 10°S, we predicted that, on average, 6.5 species would become locally extinct per 0.5° latitude under the climate change emissions scenario Representative Concentration Pathway 8.5. Average invasions were predicted to be 2.0 species per 0.5° latitude in the Arctic Ocean and 1.5 species per 0.5° latitude in the Southern Ocean. These averaged global hotspots of invasion and local extinction intensity are robust to the different SDM used and coincide with high levels of agreement. 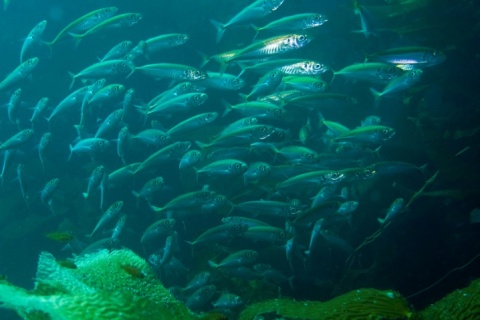