Is trade liberalisation a vector for the spread of sugar-sweetened beverages? A cross-national longitudinal analysis of 44 low- and middle-income countries

Concerns about the links between trade and investment agreements and the spread of sugar-sweetened beverages (SSBs) have seen increasing scholarly attention in the past years. Reviewing 44 low- and middle-income countries over 13 years, this paper aims to provide a generalizable analysis of how trade and investment liberalisation has affected the growth in sales of SSBs, contributing to the evidence base on how international trade impacts health.

It shows that higher tariffs on SSBs significantly decreased per capita SSBs imports in low and middle income countries (LMICs) and that policies that liberalise trade of SSBs will likely lead to the spread of these products. The paper finds that sales in the LMICs grew at 3.9% per annum, from 43.4 L per capita in 2001 to 65.3 L per capita in 2014, an increase in sales of 9.1 L per person. This is an overall increase of 50.1% on average, but in some regions, such as Latin America, annual per capita sales now exceed 100 L per capita per year.  The authors note that simultaneous impact of investment and trade liberalisation in food environments of LMICs is not fully explained in this paper, but they point to a link between FDI flowing from food and beverage multinational companies based in high-income countries to LMIC markets and a substantial increase in imports of SSBs into LMICs.

The paper states that a direct link between tariffs and SSBs sales cannot be made (only an indirect link via imports) and it points to the many other factors that may influence sales such as demand, local productivity, quality, and marketing. Based on these findings however, tariffs may have a role in counteracting the entrance of harmful products in emerging markets of LMICs. The authors recommend advocacy groups that they demand that public health should be prioritised when governments draft trade agreements.

This paper only looks at the impacts of tariffs and excludes non-tariff barriers such as import quotas, subsidies, customs delays and technical barriers, emphasising the need for further research analysing effects of both types of measures.

Does trade and investment liberalisation increase the growth in sales of sugar-sweetened beverages (SSBs)? Here, for the first time to our knowledge, we test this hypothesis using a unique data source on SSB-specific trade flows. We test whether lower tariffs effectively increase imports of SSBs, and whether a higher level of imports increase sales of SSBs. Cross-national fixed effects models were used to evaluate the association between SSBs sales and trade liberalisation. SSBs per capita sales data were taken from EuroMonitor, covering 44 low- and middle-income countries from 2001 to 2014, SSBs import data were from TradeMap, Foreign Direct Investment data were from EuroMonitor, and data on applied tariffs on SSB from the World Trade Organisation tariffs database, all 2015 editions. The results show that higher tariffs on SSBs significantly decreased per capita SSB imports. Each one percent increase in tariffs was associated with a 2.9% (95% CI: 0.9%–5%) decrease in imports of SSBs. In turn, increased imports of SSBs were significantly associated with greater sales of SSBs per capita, with each 10 percent increase in imports (in US$) associated with a rise in sales of 0.36 L per person (95% CI: 0.08–0.68). Between 2001 and 2014, this amounted to 9.1 L greater sales per capita, about 40% of the overall rise seen in this period in LMICs. We observed that tariffs were inversely but not significantly associated with sales of SSBs. In conclusion, lower tariffs substantially increased imports of SSBs in LMICs, which translated into greater sales. These findings suggest that trade policies which lower tariff barriers to SSB imports can be expected to lead to increased imports and then increased sales of SSBs in LMICs, with adverse consequences for obesity and the diseases that result from it. 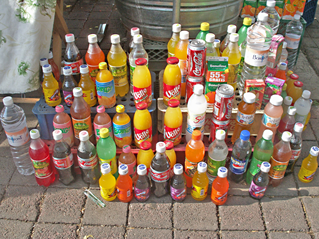