This book argues that glyphosate, the most commonly used weedkiller in the world, disrupts the gut microbiome and is linked to chronic diseases in humans as well as to soil degeneration and harm to wildlife.

From an MIT scientist, mounting evidence that the active ingredient in the world’s most commonly used weedkiller is contributing to skyrocketing rates of chronic disease.

Glyphosate is the active ingredient in Roundup, the most commonly used weedkiller in the world. Nearly 300 million pounds of glyphosate-based herbicide are sprayed on farms—and food—every year.

Agrochemical companies claim that glyphosate is safe for humans, animals, and the environment. But emerging scientific research on glyphosate’s deadly disruption of the gut microbiome, its crippling effect on protein synthesis, and its impact on the body’s ability to use and transport sulfur—not to mention several landmark legal cases— tells a very different story.

Throughout Toxic Legacy readers will discover:

As Rachel Carson did with DDT in the 1960s, Stephanie Seneff sounds the alarm on glyphosate, giving you guidance on simple, powerful changes you can make right now and essential information you need to protect your health, your family’s health, and the planet on which we all depend.

Seneff, S. (2021). Toxic Legacy: How the Weedkiller Glyphosate Is Destroying Our Health and the Environment, Chelsea Green Publishing, London. 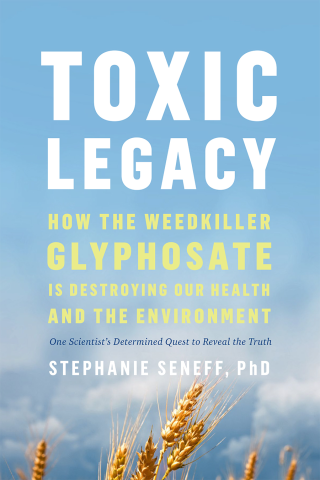