This paper, published in the journal Science, aims to establish a detailed “roadmap” for meeting the Paris climate goal. It provides not only a scenario for the CO2 emissions reductions needed but places attention on the many different policy actions needed to stay below 2°C warming. One of three main focus areas is agriculture and land use related emissions.

In this paper the group of European researchers lay out in detail what would have to happen in each of the next three decades until 2050 if we want to stay well below 2°C without geoengineering. They do so in an effort to address the “alarming inconsistencies” that remain between science-based targets in the Paris agreement and national commitments made in INDCs.

The roadmap focuses on three areas of action:

Arguing that model-based decarbonization assessments and scenarios often cannot capture transformative change and the dynamics associated with it (disruption, innovation, and nonlinear change in human behavior) their proposal is that we start framing the decarbonization challenge in terms of a global roadmap where we halve gross anthropogenic carbon-dioxide (CO2) emissions every decade. A decarbonization narrative in four dimensions is described – innovation, institutions, infrastructures, and investment – to provide evidence of feasibility and depth of transformation for economies to stay on a carbon-law trajectory. The narrative identifies crucial steps, grounded in published scenarios combined with expert judgment. Each step has two parts: actions for rapid near-term emissions reductions, and actions for systemic and long-term impact, creating the basis for the next steps. The overall ambition is to create a better, more concrete foundation for national and international climate strategies. 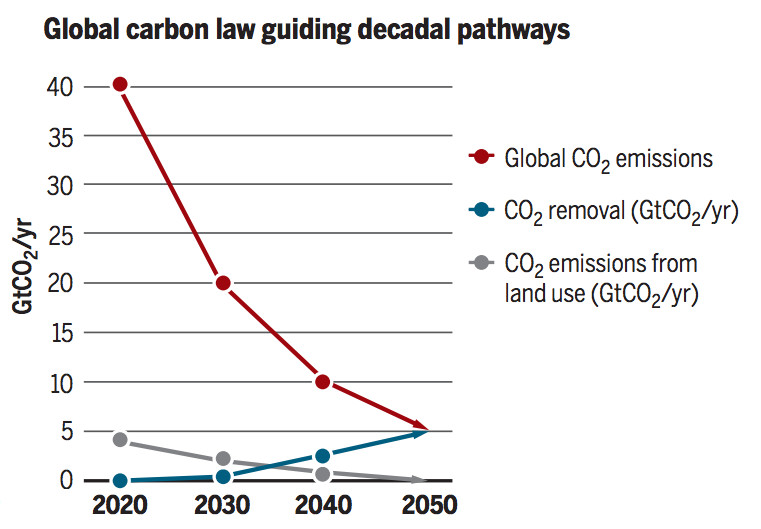 The authors describe the radical change needed as follows:

To achieve this, they formulate some extremely ambitious targets for each decade where the period 2017–2020 is focused on the “no-brainers” policy instruments that are well-proven (and ideally income-neutral) such as carbon tax schemes, cap-and-trade systems, feed-in tariffs, and quota approaches. Moreover they suggest that:

On food specifically the authors write:

Although the Paris Agreement's goals (1) are aligned with science (2) and can, in principle, be technically and economically achieved (3), alarming inconsistencies remain between science-based targets and national commitments. Despite progress during the 2016 Marrakech climate negotiations, long-term goals can be trumped by political short-termism. Following the Agreement, which became international law earlier than expected, several countries published mid-century decarbonization strategies, with more due soon. Model-based decarbonization assessments (4) and scenarios often struggle to capture transformative change and the dynamics associated with it: disruption, innovation, and nonlinear change in human behavior. For example, in just two years, China's coal use swung from 3.7% growth in 2013 to a decline of 3.7% in 2015 (5). To harness these dynamics and to calibrate for short-term realpolitik, we propose framing the decarbonization challenge in terms of a global decadal roadmap based on a simple heuristic—a “carbon law”—of halving gross anthropogenic carbon-dioxide (CO2) emissions every decade. Complemented by immediately instigated, scalable carbon removal and efforts to ramp down land-use CO2 emissions, this can lead to net-zero emissions around mid-century, a path necessary to limit warming to well below 2°C.

Lead author Johan Rockström is known for having introduced the concept Planetary boundaries, a framework to describe and measure the global biophysical boundaries that can help define a 'safe planetary operating space' for humanity. The FCRN has provided summaries of both the original paper and report as well as a paper providing an update on the science behind the concept by Rockström and colleagues.

See also the work by Kate Raworth which builds on the planetary boundaries concept but additionally introduces the human social dimension. 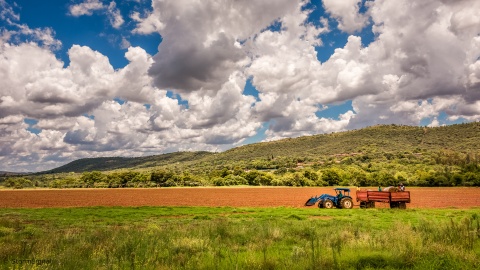