On 6 May 2022, TABLE held a panel discussion, which brought together representatives from the advertising and food industries, from social enterprise and academia to explore advertising, food, desire and the question of ecological limits.

Each day, the average British consumer will see around 3000 commercial messages – on billboards, on their screens, on television – and 15% of these will be for food. Advertising is part of life.

And although most of us may not ‘see’ most of the ads we’re exposed to any more, advertising clearly works – it gets us to buy things. The advertising sector estimates that in the UK alone, nearly £90 billion worth of products were sold as a result of its persuasions. But while advertising may be good for the economy, it’s making the climate problem worse. One recent report estimates that emissions generated by the increase in UK sales that arise from successful advertising amount to around 186 mtCO2 eq. This is equivalent to about half the UK’s domestically produced emissions.

That said, if advertising is clearly part of the problem today, could it also be reconfigured to become part of the solution?  Could the sector rise to the challenges of helping achieve a 1.5C, net zero world, and, more specifically in the case of food – a food system that is healthier, fairer, and less environmentally damaging? Could it play its part by persuading us to want, and to consume better, differently – even less? Can we, in short, decouple desire from damage?

Ben Essen is Chief Strategy Officer at Iris Worldwide, a global integrated marketing agency, and the co author of the Advertised Emissions report which quantifies the increase in emissions arising from the increase in consumption that can be attributed to advertising

Fergus Lyon is a Professor of Enterprise and Organisations at Middlesex University in London and Deputy Director of the ESRC Centre for the Understanding of Sustainable Prosperity. He has a particular research focus on social enterprise but combines his academic career with the running of a B-Corps certified mixed farm in Hertfordshire.

April Redmond is a global brand vice president at Unilever, responsible for the Knorr range, whose ambition is "to be a force for good and to get food that is good for people and the planet on 7 billion plates by 2025".

This online event was chaired by Tara Garnett, director of TABLE and a researcher at the University of Oxford.

We are curious to hear your views; you can continue the conversation on our community platform. 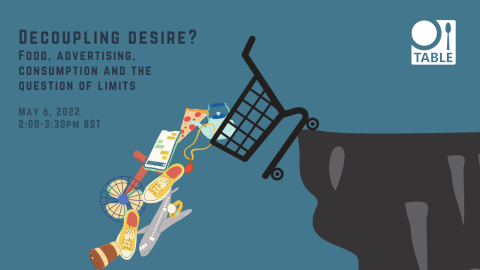