Re-framing the climate change debate in the livestock sector: mitigation and adaptation options

This review article provides a summary of the multiple environmental and societal costs and benefits of livestock production. Homing in on climate change, it reviews the range of GHG mitigation options that have been proposed both on the supply side (actions that potentially reduce emissions per unit of production, or absolute emissions, considering both changes in practice and in policy) and those on the demand side (e.g. reductions in meat consumption, waste reduction).

It then turns to the flip side of the climate coin, the livestock sector’s vulnerability to climate change, and considers the adaptation options there.  Throughout, the paper emphasises the need to recognise the multiplicity of different livestock systems and contexts  - characterised crudely as grazing, mixed-crop livestock, and industrial systems but with multiple gradations – and the differing needs of those engaged in livestock related activities.

It highlights three measures that offer both mitigation and adaptation benefits: land management (to reduce deforestation and land degradation); reductions in meat consumption; and greater integration of the crop and livestock sectors (see figure, copied).  These different approaches, however, will need to play out differently in different parts of the world, depending on the specific nutritional, social, economic and environmental contexts within which action is taken.  Finally, it emphasises the need for a food systems perspective that seeks to deliver mitigation and adaptation in tandem with other social and environmental benefits.

Livestock play a key role in the climate change debate. As with crop-based agriculture, the sector is both a net greenhouse gas emitter and vulnerable to climate change. At the same time, it is an essential food source for millions of people worldwide, with other functions apart from food security such as savings and insurance. By comparison with crop-based agriculture, the interactions of livestock and climate change have been much less studied. The debate around livestock is confusing due to the coexistence of multiple livestock farming systems with differing functions for humans, greenhouse gas (GHG) emission profiles and different characteristics and boundary issues in their measurement, which are often pooled together. Consequently, the diversity of livestock farming systems and their functions to human systems are poorly represented and the role of the livestock sector in the climate change debate has not been adequately addressed. In this article, building upon the Intergovernmental Panel on Climate Change Fifth Assessment Report (IPCC 5AR) findings, we review recent literature on livestock and climate change so as better to include this diversity in the

You can read related research by browsing the following categories of our research library: Animal issues; Climate change mitigation, and through the keyword categories: Grazing & land use; Livestock; GHG impacts & mitigation; Ruminants. 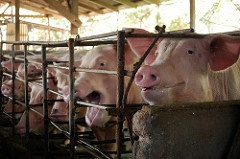