In this modelling study, the authors examine potential trade-offs between sufficient food provisioning in the future and sustaining biodiversity. On the one hand they find that cropland expansion increases food security, particularly in areas which are currently struggling with access to safe and nutritious food.

On the other, much of the modelled expansion could take place in regions that have a high biodiversity conservation value.

The study took a threefold approach in which it examined 1) the impact of cropland expansion on food quantity and prices, 2) which areas of the Earth were most biophysically suitable for expansion, and 3) where hotspots of species endemism overlapped with suitable areas for cropland (an endemic species is one which is unique to that particular location and can't be found elsewhere). In step one, they compared a baseline scenario – in which by 2030, no additional non-managed land has been brought under agricultural production – with a scenario based on FAO projected demand for some of the most important crops which assumes a 7% global expansion of agricultural land use. The economic model Dynamic Applied Regional Trade (DART) is then used to simulate where expansion and contraction of crop land might occur across the globe (see figure below).

Fig: Percentage change in global crop production under the land expansion scenario and harvested area in 2030 compared with 2007.

In the model, the global production of primary agricultural goods in the land expansion scenario, is increased by between 3 and 9 %, and processed food production rises by 3 % compared with the baseline scenario in 2030. This increase in produced food would lead to reduced prices (by 6 to 20%) and so, the authors assume, increased food security. Soybean production triggered the largest simulated crop land expansion (13%) and price decreases out of all the crops modelled, compared with the baseline scenario.

In terms of agricultural suitability and endemism, the analyses found spatial concordance between patterns across regions. That is to say, regions with low suitability for cropland expansion were also low in richness of endemic species, and consisted mostly of non-arable, desert or ice-covered land. Examining areas with higher endemism though, more varied results arose. Overall, the model showed that estimated cropland expansion risked taking place in many regions that are valuable for biodiversity conservation.

Potential trade-offs between providing sufficient food for a growing human population in the future and sustaining ecosystems and their services are driven by various biophysical and socio-economic parameters at different scales. In this study, we investigate these trade-offs by using a three-step interdisciplinary approach. We examine (1) how the expected global cropland expansion might affect food security in terms of agricultural production and prices, (2) where natural conditions are suitable for cropland expansion under changing climate conditions, and (3) whether this potential conversion to cropland would affect areas of high biodiversity value or conservation importance. Our results show that on the one hand, allowing the expansion of cropland generally results in an improved food security not only in regions where crop production rises, but also in net importing countries such as India and China. On the other hand, the estimated cropland expansion could take place in many highly biodiverse regions, pointing out the need for spatially detailed and context-specific assessments to understand the possible outcomes of different food security strategies. Our multidisciplinary approach is relevant with respect to the Sustainable Development Goals for implementing and enforcing sustainable pathways for increasing agricultural production, and ensuring food security while conserving biodiversity and ecosystem services.

To find related research, look at the following categories in our research library: Land; Economy; Biodiversity and ecosystems 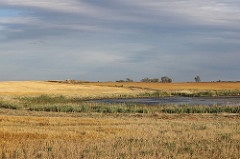