This paper, co-authored by Table member Simon Lloyd, simulates the likely implications for hunger and health of subsistence farmers either using a “peasant” (agroecological) or an “entrepreneurial” (input-heavy) style of farming, under a range of scenarios for climate and policy. The paper aims to move away from approaches to food security research that focus on the quantity and quality of food available, and towards one that considers the social and political factors that influence access to food and the viability of different farming options. The study models a generic landscape that is not intended to represent a particular location.

The authors use the term “producer-consumers” to refer to the ~2 billion people who live on smallholder farms. They note that these producer-consumers are usually not explicitly included in models of the links between climate change and undernutrition. Furthermore, models of climate and health generally distinguish between different farm sizes and input levels, but not between different farming styles. The present work focuses on style of farming and adopts a perspective that aligns more with “food sovereignty” than “food security”, because it addresses how food is produced and who controls it.

The paper uses an agent-based model, which simulates how decisions made at the household level can give rise to patterns at the macro scale (e.g. food price). In the model, producer-consumer households practicing “orphan” farming (subsistence farming relying on manual tools and using very limited inputs such as fertiliser) on one-hectare plots can convert to either “entrepreneurial” farming (highly reliant on purchased inputs, and aiming to maximise returns on investment) or “peasant” style farming (with minimal external inputs but intensified labour; aiming to maximise returns on labour by using agroecological processes learned about from community networks).

Note that “orphan”, “entrepreneurial” and “peasant” are the terms chosen by the paper authors. Author Simon Lloyd says: "...peasant is a term of self identification (e.g. La Via Campesina), a field of academic study (e.g. Journal of Peasant Studies), and a group with recognised rights (e.g. the United Nations Declaration on the Rights of Peasants and Other People Working in Rural Areas)."

The scenarios vary according to:

The following outcomes from the model are assessed:

The figure below gives a schematic representation of the model. Image: Figure 1, Lloyd et al. Schematic diagram of the agent-based model. The central cycle (thick black arrows) represents the farm production process, with each cycle occurring over one year (i.e. one timestep). Agents (farming households), corporate agriculture (represented as an exogenous forcing term) and the environment (1ha plots) are shown in grey and green. Agent decisions are shown in blue. Scenario options are shown in orange. Health-related outcomes are shown in red.

The authors stress that their model is not intended to represent the real world (indeed, the model does not represent a specific location); rather, they intend to show that farming styles, whether “entrepreneurial” or “peasant”, can strongly influence nutrition and health in rural communities, and should therefore be given more attention by researchers and policymakers.

That said, the insights from the model include (see Table 5 and Table 6 of the original paper for full details and discussion of the mechanisms by which the results occur):

Undernutrition is a major contributor to the global-burden of disease, and global-level health impact models suggest that climate change-mediated reductions in food quantity and quality will negatively affect it. These models, however, capture just some of the processes that will shape future nutrition. We adopt an alternative standpoint, developing an agent-based model in which producer-consumer smallholders practice different ‘styles of farming’ in the global food system. The model represents a hypothetical rural community in which ‘orphan’ (subsistence) farmers may develop by adopting an ‘entrepreneurial’ style (highly market-dependent) or by maintaining a ‘peasant’ style (agroecology). We take a first look at the question: how might patterns of farming styles—under various style preference, climate, policy, and price transmission scenarios—impact on hunger and health-supporting conditions (incomes, work, inequality, ‘real land productivity’) in rural areas? Simulations without climate change or agricultural policy found that style preference patterns influence production, food price, and incomes, and there were trade-offs between them. For instance, entrepreneurial-oriented futures had the highest production and lowest prices but were simultaneously those in which farms tended towards crisis. Simulations with climate change and agricultural policy found that peasant-orientated agroecology futures had the highest production, prices equal to or lower than those under entrepreneurial-oriented futures, and better supported rural health. There were, however, contradictory effects on nutrition, with benefits and harms for different groups. Collectively the findings suggest that when attempting to understand how climate change may impact on future nutrition and health, patterns of farming styles—along with the fates of the households that practice them—matter. These issues, including the potential role of peasant farming, have been neglected in previous global-level climate-nutrition modelling but go to the heart of current debates on the future of farming: thus, they should be given more prominence in future work. 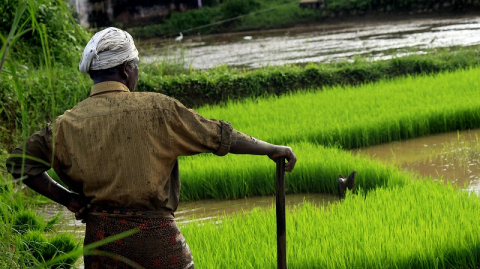