This book describes Lume, a method for analysing the economic and ecological impacts of agroecological farming systems. It includes a case study of family farms in a region of Brazil affected by droughts.

Despite the growing recognition of family farming and agroecology, there is still a dearth of analytical tools to help understand the economic and ecological rationales of family-managed agroecosystems. The Lume method described in this book was developed as a contribution to fill this gap. In the Lume method, the agroecosystem is viewed as a ‘cultivated, socially managed ecosystem’. This holistic analytical method is based on concepts and tools capable of both recognising and increasing the visibility of the labour of different people involved in the management of agroecosystems. To this end, it adopts an analytical approach consistent with a feminist economics critical of the sexual division of labour and patriarchy as well as the cultural and ideological underpinnings of dominant economic relations that mask the essential role of female farmers in generating social wealth. In this book, the Lume method is used in a study of the impact of a public water security programme on the socio-ecological resilience of family farming in a drought- affected region of Brazil. The authors show how the use of the Lume method has helped reveal the growing contradictions between the scientific premises of agricultural modernisation and the local realities of family farming in different socio-environmental contexts. At the same time, the Lume method is shown to be extremely useful in enabling participatory processes of knowledge production on the positive multi-dimensional impacts of agroecology on agricultural development. 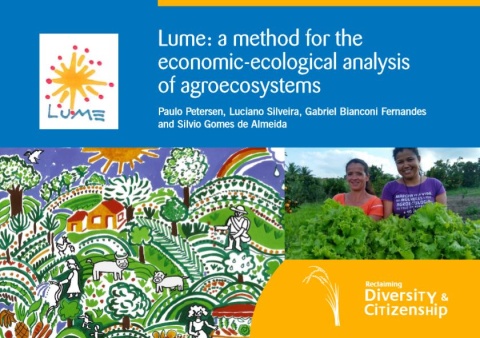