In this paper FCRN member Afton Halloran and colleagues Hanboonsong, Roos and Bruun present a life cycle assessment of insect farming, based on their research on cricket and broiler farms in north-eastern Thailand as well as a socio-economic impact analysis of this production.

In a blog-post for the FCRN (17th May 2017), Afton presents some of the main findings from the research.

The researchers model a potential scaled up scenario of the cricket production on these farms in their paper and compare the environmental impacts from cricket, broiler farming, concluding that broiler farming has higher impacts than cricket farming. The majority of these environmental impacts are associated with feed ingredients and the authors present some options to further reduce the impacts of cricket farming by improving local feed formulas and knowledge about cricket nutrition. The authors also touch on the tension between small-scale, versus intensified industrialised systems of production. Small-scale cricket production in Thailand is seen as a successful example of what sustainable agricultural production could look like when having to balance social, cultural, environmental and economic objectives. The authors highlight, however, the potential marginalisation of small-scale producers (and related socio-economic costs) that could result if production were to be industrialised.

Over the last few years, edible insect species have been heralded as an environmentally sustainable solution to current and future food crises. However, the few existing studies that aim to evaluate the environmental performance of insect farming systems are extremely limited in scope. This paper presents the first case of a life cycle assessment (LCA) performed on an existing production system of Gryllus bimaculatus De Geer (field cricket) and Acheta domesticus (house cricket) production in north-eastern Thailand and compares it with broiler production in the same region. The system boundaries of the production system considered the entire production cycle of edible crickets as well as processing. The study included two functional units (1 kg of edible mass and 1 kg of protein in edible mass). Irrespective of the functional unit, larger impacts were associated with broiler production. Major hotspots for cricket and broiler production were related to the production soybean meal and maize grain for feed. A scaled-up cricket farming system which was considered as a possible 'future' scenario demonstrated a reduction in overall environmental impacts when compared to current cricket production and industrial broiler production. While scaled-up cricket farming showed fewer overall environmental impacts, intensified systems could potentially have reduced socioeconomic impacts on rural areas in Thailand. Improvement options could be adopted by undertaking further research into the formulation of local feeds and acquiring improved knowledge about cricket nutrition. 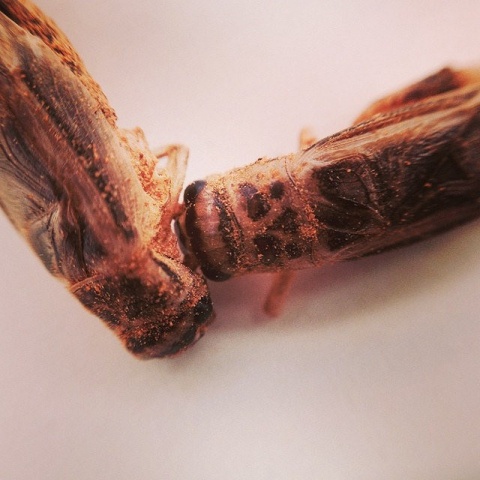