Wastewater canals used to irrigate urban agriculture in Burkina Faso may harbour dangerous microbes such as tuberculosis and genes that give microbes resistance to antibiotics, according to this research paper. The canals sampled by the researchers were designed to protect against flooding, but are used to water agricultural fields. The canals, which are not regularly cleaned, receive sludge, solid waste, wastewater, and effluent from a hospital, a market, houses and a slaughterhouse.

The researchers call for improved provision of clean water and sanitation to reduce the dissemination of bacterial resistance.

State of art metagenomics were used to investigate the microbial population, antibiotic resistance genes and plasmids of medical interest in wastewater used for urban agriculture in Ouagadougou (Burkina Faso). Wastewater samples were collected from three canals near agricultural fields in three neighbourhoods. Assessment of microbial population diversity revealed different microbial patterns among the different samples. Sequencing reads from the wastewaters revealed different functional specializations of microbial communities, with the predominance of carbohydrates and proteins metabolism functions. Eleven pathogen-specific and 56 orthologous virulence factor genes were detected in the wastewater samples. These virulence factors are usually found in human pathogens that cause gastroenteritis and/or diarrhoea. A wide range of antibiotic resistance genes was identified; 81 are transmissible by mobile genetic elements. These included seven different extended spectrum β-lactamase genes encoding synthesis of four enzyme families, including two metallo-β-lactamases (blaAIM-1 and blaGES-21). Ten different incompatibility groups of Enterobacteriaceae plasmid replicons (ColE, FIB, FIC, FII, P, Q, R, U, Y, and A/C), and 30 plasmid replicon types from Gram-positive bacteria. All are implicated in the wide distribution of antibiotic resistance genes. We conclude that wastewater used for urban agriculture in the city represents a high risk for spreading bacteria and antimicrobial resistance among humans and animals. 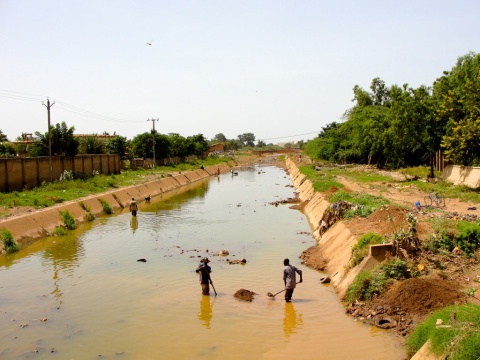