Intensifying agriculture to protect the Amazon

This paper models the extent to which intensification of soybean and maize production in Brazil could help to reduce agricultural expansion and protect ecosystems including the Amazon rainforest.

The study quantifies the yield gap by comparing current yields with the potential yield that could be achieved based on crop simulation models and data on weather and soils. The potential yield is theoretical and may be difficult to reach in practice because of the high costs, complexities and environmental impacts of increasing agricultural inputs; the paper therefore sets the “attainable yield” at 80% of the potential yield, deeming this level to be reasonably manageable for farmers to actually achieve. The difference between actual and attainable yields for soybean production is found to be greater in the northern regions of Brazil - the Amazon and the Cerrado - than in the south.

The paper then compares three scenarios:

The INT scenario results in soybean production volumes between BAU (higher) and NCE (lower); less than one fifth of the land conversion than is found in the BAU scenario (NCE results in zero land conversion); and less than half of the greenhouse gas emissions compared to BAU (mostly due to avoided land use change), albeit slightly higher than the NCE scenario; INT also results in lower income from soybean and maize production than in BAU, but higher than in NCE.

The authors argue that the intensification scenario represents a balance between environmental and economic goals, as it could significantly reduce encroachment into the Amazon rainforest without having the same level of economic impact as only imposing restrictions on land conversion. They note that any measures to promote intensification should be accompanied by policies that ensure yield improvements actually result in sparing land for nature.

The Amazon basin includes 550 Mha covered with rainforests, and 60% of this area is in Brazil. The conversion of rainforest for soybean production raises concerns about how Brazil can reconcile production and environmental goals. Here we investigated the degree to which intensification could help Brazil produce more soybean without further encroachment on the Amazon forest. Our analysis shows that the continuation of current trends in soybean yield and area would lead to the conversion of an additional 5.7 Mha of forests and savannahs during the next 15 years, with an associated 1,955 Mt of CO2e released into the atmosphere. In contrast, the acceleration of yield improvement, coupled with the expansion of soybean area only in areas currently used for livestock production, would allow Brazil to produce 162 Mt of soybean without deforestation and with 58% lower global climate warming relative to that derived from the continuation of current trends. 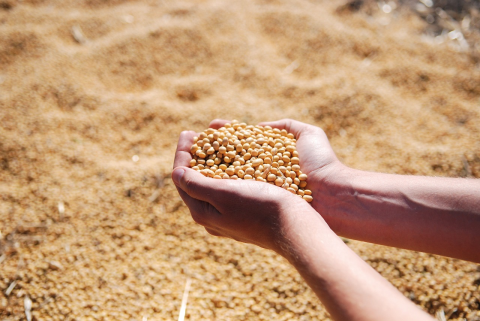