As agricultural production of high-yielding cereals has increased over the past half-century, production of more nutrient-rich cereals has declined. Access to food of high nutritional quality is profoundly important, especially for the 2 to 3 billion people who are undernourished, overweight, or obese or deficient in micronutrients.

In this article in the policy forum section of the journal Science, five American authors propose that the nutritional content of cereals is added to standard metrics for agricultural yield.

Healthy diets rely not only on energy from calories, but on other macronutrients (such as proteins and fats), and micronutrients (such as iron and zinc) as well. Between 1961 and 2011, the energy density of the cereal supply (excluding cereals used to feed livestock) remained constant because the caloric contents of different cereals were similar. However, during this time, the proportion of the global agricultural area for cereals used for rice, wheat, and maize production increased from 66% to 79%. At the same time, the collective area used to produce barley, oats, rye, millet, and sorghum declined from 33% to 19. Those crops which decreased in area tend to have higher micronutrient content. The authors give the example of millet which has a four times higher iron content per unit than does rice, and oats which contain four times more zinc than wheat. The changes in crop area for respective cereals have resulted in the protein, iron, and zinc content in the global, directly consumed cereal supply declining by 4%, 19%, and 5% respectively (see figure below).

Nutritional content of global cereal supply has declined as production has increased since 1960. (A) Fraction of Daily Recommended Intake (DRI) provided by 100 g dry weight from a mix of eight cereals (barley, oats, maize, millet, rice, rye, sorghum, and wheat) from 1961 to 2011 for macronutrients (energy and protein) and micronutrients (iron and zinc). Values were calculated from production quantity (excluding cereals used for livestock feed) and nutritional composition for each cereal crop (figs. S2 to S4). DRI does not account for differences among cereals in bioavailability (14) or refining, both of which would further reduce DRI values. (B) Nutritional yields (number of adults who can obtain 100% of annual DRI from 1 ha per year) of eight cereals for energy, protein, iron, and zinc for global supply in 2013. See SM for details.

Future food demand will likely be met mostly through further intensification rather than expansion of agriculture into uncultivated areas because of increasing competition for land for other uses such as carbon storage, watershed protection, conservation, and other ecosystem services. The authors of this article argue that any metrics for sustainable intensification should recognise the importance of nutritional content of different food crops. For example, current analyses of trade-offs and synergies between ecosystem services and food production at local and global scales generally use crop yield or calories as a metric to compare strategies for fulfilling food demand. These should, in the future, include consideration of essential nutrients in the human diet. They propose a metric called “nutritional yield,” which is the number of adults who would be able to obtain 100% of their recommended DRI of different nutrients for 1 year from a food item produced annually on one hectare. While people never obtain all of their recommended nutrients from a single food source, this metric should allow for nutritional  comparison among different production systems.

Over the past half-century, the paradigm for agricultural development has been to maximize yields through intensifying production, particularly for cereal crops (1). Increasing production of high-yielding cereals—wheat, rice, and maize—has replaced more nutrient-rich cereals, which has eroded the content of essential dietary nutrients in the world's cereal supply. New approaches are needed to produce healthy foods, rich in essential nutrients, with efficient use of land. Standard yield metrics that measure the quantity of production are inadequate to assess progress toward this goal; thus, we propose alternative metrics of nutritional yields. 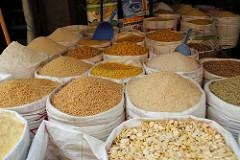