This study models the water demand of land acquisitions in Africa as a function of crop choice, local climate, and irrigation scenarios. Its authors distinguish between green and blue water, equating to water from rainfall and that provided to crops by irrigation respectively.

They find that, for Africa, irrigating all crops grown on land currently leased to transnational companies would require 2.1–3.5 km3 of blue water per year in addition to what is supplied naturally from rainfall. However, if this water could indeed be made available, yields could be increased to almost double that of rainfed agriculture.

The study was undertaken in three stages: First, the researchers estimated and identified site-specific green and net blue water demand of crops grown on acquired land in production. They used the Land Matrix database (2014) to find those areas larger than 200 ha which were contracted for commercial agriculture by companies with at least one transnational investor, for timber extraction, carbon trading, food, feed, and renewable energy production. Crucially only 3% of the land noted as contracted in the database was in production (many land deals had been cancelled or not taken further); only active land concessions were considered.

Second, the researchers calculated yields – as well as green and gross blue water demand – for crops grown on the active concessions under seven irrigation scenarios, and for typical local staple crops as a baseline. They note that the type of irrigation used depends on factors such as economic costs, labour intensity, water rights, and governance. As they could not include these factors in the biophysical (as opposed to socio-economic) framework they created, they sought to bracket the range in water use given a variety of irrigation scenarios.

Finally, the researchers developed a Blue Water Index (BWI) which points out hotspot areas of increased competition for freshwater resources where demand for blue water is larger than green water supply.

In one scenario (sprinkler irrigation) the study found that ‘blue water-use hotspots’ in land acquisitions were located all over Sub-Saharan Africa, particularly in the East (see figure below). 22% of the studied land acquisitions required over half of its water supply from irrigation rather than rainfall. Depending on the form of irrigation (surface, prinkler, or drip), the model predicts that irrigating all crops in land in Africa leased to transnational companies would require 2.1–3.5 km3 of blue water per year in addition to what is supplied naturally from rainfall.

Figure: Individual land acquisitions with a BWI less than 50% (Left, 79 land deals now in production where the majority of water demand is met by precipitation), and land acquisitions with a BWI greater than 50% (Right, 42 land deals where the majority of water demand would be extracted from irrigation). The BWI in this figure is based on the current national irrigation efficiency scenario (39) for crops grown there.

The authors state that their study ‘highlights areas that might experience conflicts and tensions over freshwater use between sectors, especially hotspots using more than 50% blue water for crop production.’ The paper does not, however,relate these hotspots to existing baseline conditions i.e. the extent of current risk of water stress, nor to or future risks of water. What the authors have shown is that given national averages, under ideal agricultural management, 22% of current large-scale agricultural projects by transnational companies in Africa (n=42) would need over half its water from irrigation rather than rainfall. It is worth noting that they do not provide evidence that 1) companies operating the projects they have included in their model do or will use irrigation at the levels they suggest (e.g. companies may decide to go for less/no irrigation and accept a lower yield), 2) that freshwater is scarce in those areas, and 3) that conflicts have taken place in these areas or indeed at a higher rate than in other areas.

Any comments or links to related studies that might clarify the situation would be much appreciated. Please post your comments under this entry (log in needed).

In the last decade, more than 22 million ha of land have been contracted to large-scale land acquisitions in Africa, leading to increased pressures, competition, and conflicts over freshwater resources. Currently, 3% of contracted land is in production, for which we model site-specific water demands to indicate where freshwater appropriation might pose high socioenvironmental challenges. We use the dynamic global vegetation model Lund–Potsdam–Jena managed Land to simulate green (precipitation stored in soils and consumed by plants through evapotranspiration) and blue (extracted from rivers, lakes, aquifers, and dams) water demand and crop yields for seven irrigation scenarios, and compare these data with two baseline scenarios of staple crops representing previous water demand. We find that most land acquisitions are planted with crops that demand large volumes of water (>9,000 m3⋅ha−1) like sugarcane, jatropha, and eucalyptus, and that staple crops have lower water requirements (<7,000 m3⋅ha−1). Blue water demand varies with irrigation system, crop choice, and climate. Even if the most efficient irrigation systems were implemented, 18% of the land acquisitions, totaling 91,000 ha, would still require more than 50% of water from blue water sources. These hotspots indicate areas at risk for transgressing regional constraints for freshwater use as a result of overconsumption of blue water, where socioenvironmental systems might face increased conflicts and tensions over water resources.

You can find the full paper here.

We have run a two-part blog series on water footprinting early in 2016 written by two FCRN members. The first blog ‘An update on water footprints’ by Brad Ridoutt at CSIRO, Australia’s national science agency, gives an in-depth introduction to water footprinting. The follow up piece ‘Water footprint is the answer. Now what’s the question?’ by Dr Tim Hess from Cranfield University, goes more into detail about the water stress footprint associated with different foods. 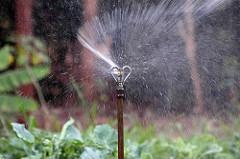