This paper models the global land use change implications of three different dietary scenarios up to the year 2100: business as usual with a continued shift away from pulses and starchy roots and towards animal products; a 95% global reduction in consumption of ruminant products compared to business as usual, with ruminant products to be replaced by cereals, pulses, starchy roots and oilcrops but other meat types to be consumed as in business as usual; and a 95% reduction in consumption of both ruminant and monogastric products.

The paper also finds that reducing both ruminant and monogastric consumption leads to a decrease in nitrogen fertiliser application and irrigation water use relative to business as usual. However, reducing only ruminant consumption leads to similar nitrogen and water use levels as in business as usual, because of the continued use of crops as feed for monogastric livestock in addition to extra crops being required to replace ruminant products.

The figure below summarises the changes in cropland area, pasture area, natural land cover, nitrogen application and irrigation water use under each of the three scenarios.

In tropical species-rich regions, the area of natural land cover in 2100 remains approximately the same as in 2010 in both cases (reducing only ruminant consumption and reducing both ruminant and monogastric consumption) because cropland expansion in tropical areas offsets a reduction in pasture area in these regions. However, as shown in the figure below, both cases represent an improvement over business as usual from the point of view of conserving regions of biodiversity for birds, mammals and amphibians as well as Conservation International biodiversity hotspots.

Image: Figure 3 of Henry et al. Projected natural land change by 2100 in (a) bird-, (b) mammal-, and (c) amphibian- species-rich regions, and (d) CI hotspots for the different dietary scenarios. BAU - business as usual. LOW-R = 95% reduction of ruminant consumption compared to BAU. LOW-AP = 95% reduction of both monogastric and ruminant consumption compared to BAU.

The paper suggests that interventions to change global diets (e.g. to reduce meat consumption) could be harmful to populations in developing countries where access to protein is limited, unless such interventions are carefully designed so as not to harm food security. One approach proposed by the paper is for developed countries to reduce their animal product consumption and for developing countries with insufficient access to animal protein to import sustainably-produced animal products (‘sustainable’ is not defined in this context) in order to improve health without damaging biodiversity-rich areas. The paper does not go into detail on the economic feasibility of this approach.

Diets lower in meat could reduce agricultural expansion and intensification thereby reducing biodiversity impacts. However, land use requirements, associated with alternate diets, in biodiverse regions across different taxa are not fully understood. We use a spatially explicit global food and land system model to address this gap. We quantify land-use change in locations important for biodiversity across taxa and find diets low in animal products reduce agricultural expansion and intensity in regions with high biodiversity. Reducing ruminant meat consumption alone however was not sufficient to reduce fertiliser and irrigation application in biodiverse locations. The results differed according to taxa, emphasising that land-use change effects on biodiversity will be taxon specific. The links shown between global meat consumption and agricultural expansion and intensification in the biodiverse regions of the world indicates the potential to help safeguard biodiverse natural ecosystems through dietary change. 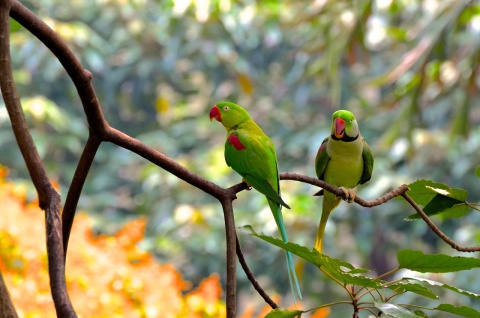