The DNA of Pseudocercospora fijiensis, the fungus that causes the black Sigatoka disease in bananas, has been sequenced and assembled in an attempt to find means of disease control. The black Sigatoka disease occurs across the tropics and is responsible for huge banana yield losses. In addition, it can cause the fruit to ripen prematurely, which stops exports of the crop. The Cavendish banana, the clonal type of bananas most consumers in the west eat is especially vulnerable to the black Sigatoka fungi.

The researchers who sequenced the fungi hope that their findings will aid in acquiring a better understanding of host resistance in bananas and lead to more sophisticated management of fungicide resistance in the pathogen.

Black Sigatoka or black leaf streak disease, caused by the Dothideomycete fungus Pseudocercospora fijiensis (previously: Mycosphaerella fijiensis), is the most significant foliar disease of banana worldwide. Due to the lack of effective host resistance, management of this disease requires frequent fungicide applications, which greatly increase the economic and environmental costs to produce banana. Weekly applications in most banana plantations lead to rapid evolution of fungicide-resistant strains within populations causing disease-control failures throughout the world. Given its extremely high economic importance, two strains of P. fijiensis were sequenced and assembled with the aid of a new genetic linkage map. The 74-Mb genome of P. fijiensis is massively expanded by LTR retrotransposons, making it the largest genome within the Dothideomycetes. Melting-curve assays suggest that the genomes of two closely related members of the Sigatoka disease complex, P. eumusae and P. musae, also are expanded. Electrophoretic karyotyping and analyses of molecular markers in P. fijiensis field populations showed chromosome-length polymorphisms and high genetic diversity. Genetic differentiation was also detected using neutral markers, suggesting strong selection with limited gene flow at the studied geographic scale. Frequencies of fungicide resistance in fungicide-treated plantations were much higher than those in untreated wild-type P. fijiensis populations. A homologue of the Cladosporium fulvum Avr4 effector, PfAvr4, was identified in the P. fijiensis genome. Infiltration of the purified PfAVR4 protein into leaves of the resistant banana variety Calcutta 4 resulted in a hypersensitive-like response. This result suggests that Calcutta 4 could carry an unknown resistance gene recognizing PfAVR4. Besides adding to our understanding of the overall Dothideomycete genome structures, the P. fijiensis genome will aid in developing fungicide treatment schedules to combat this pathogen and in improving the efficiency of banana breeding programs. 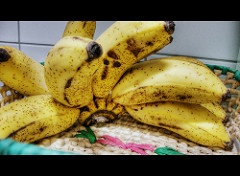