This paper finds that over ten billion people could be fed within the constraints of four planetary boundaries (biosphere integrity, land-system change, freshwater use, and nitrogen flows), if the food system undergoes a “technological-cultural U-turn”.

Today, around half of food production goes beyond local ecological boundaries, shown in the figure below.

The researchers developed a scenario that stays within the confines of the four planetary boundaries considered (note that a total of nine planetary boundaries have been identified, including climate change; the authors picked four that are strongly influenced by agriculture). As shown in the figure below, if current farming and eating practices were maintained, the food system could only provide 3.4 billion people with a balanced diet (e.g. due to having to abandon some farmland in aras under ecological pressure). However, 10.2 billion people could be fed if agricultural expansion were allowed in regions where biosphere integrity is not in danger, fertiliser use increased where it would not be damaging to do so (and is made more efficient), water management  improved, food loss reduced, and diets changed (with animal products providing no more than 25% of dietary protein).

Image: Figure 1a, Gerten et al. Global population that can be provided with a global average net food supply of 2,355 kcal cap–1 d–1 (including sufficient protein content) when respecting the different planetary boundaries given unchanged current practices (left side) and when making use of opportunities of agricultural land expansion, management and sociocultural changes within the safe operating space (right side). 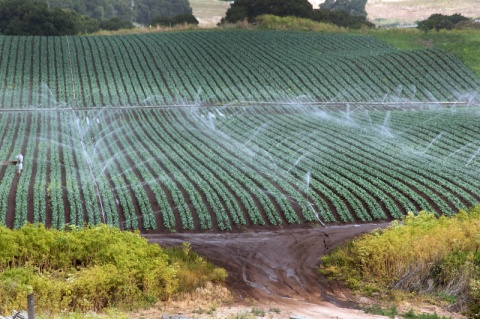