Food citizenship: Food system advocates in an era of distrust

This book, by Ray A. Goldberg, provides the perspectives of people involved in shaping the global food system, including leaders in academia, nonprofits, public health, and the private and public sectors.

The global food system is the largest segment of the world's economy. As agribusiness-studies pioneer Ray Goldberg suggests, it is also the largest health system on the planet. And it is changing fast. Its size and importance to human, environmental, and economic health means that no system is viewed with as much suspicion by so many people around the globe.

Changing societal expectations and scientific and medical advances have made the drivers of the food system—the world's food citizens—realize they must take more responsibility for society's nutritional needs, economic development, and the health of the environment. Goldberg argues that the traditionally commodity-oriented, bargaining relationship between segments of the food system has become win-win, collaborative, and characterized by public and private partnerships. Those who are responding to society's needs are succeeding; those who are not are losing out.

The food system's greatest growth area is the developing world, where millions of small-scale producers, workers, and impoverished consumers need help to become part of the commercial food system.

In this book, Ray Goldberg interviews the change makers of today's food system: leaders and constructive critics in government, private industry, nonprofits, and academia who provide a panoramic and in-depth look at a revolution in progress.

Find out more here. See also the Foodsource resource” The food system: actors and activities” in the building block What are food systems? 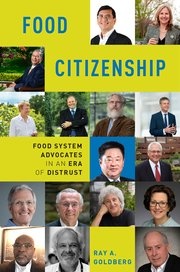