Dietary guidance for pulses: the challenge and opportunity to be part of both the vegetable and protein food groups

This paper provides an overview of dietary guidance for pulses, discussing their nutritional composition and health benefits as well as the evolution of the way in which the USDA’s dietary guidelines categorise pulses. The paper was published in a special issue on The Potential of Pulses to Meet Today’s Health Challenges: Staple Foods in the journal Annals of the New York Academy of Sciences.

Pulses are protein rich and relatively low-impact food, compared to equivalent animal based foods, yet their consumption remains low. This paper outlines some potential explanations of this trend with a focus on the US. Because of the nutritional composition of pulses, they have both been included in the protein and vegetable groups of dietary recommendations, which has caused confusion and misinterpretation. In the scientific report of the 2015 Dietary Guidelines Advisory Committee pulses were considered also in terms of their environmental sustainability. The report concluded that a diet high in plant-based foods and lower in animal based foods promotes health and tis associated with less environmental impact than an average U.S. diet. Although the guidelines ended up not taking account of sustainability - a failure that met with criticism they did end up suggesting a legume serving size of 1/2 cup (90 g) for the so called Healthy U.S. Style Eating Pattern. Surveys have showed however, that the average American only consumes a third or less than this recommendation. Culinary education is offered as one possible way forward to increase the proportion of pulses in the US diet.

Pulses are a dry, edible variety of beans, peas, and lentils that have been consumed for 10,000 years. Pulses are rich in plant-based protein and fiber, as well as micronutrients such as iron and potassium. The satiating effect of both fiber and protein assists in managing weight and combating obesity. The high fiber content and low glycemic index of pulses aid people with diabetes in maintaining blood glucose and insulin levels. Pulse consumption may improve serum lipid levels to reduce the risk of cardiovascular disease. Pulses developed as a member of both the protein and vegetable food groups as a result of its high content of plant-based protein and dietary fiber. The last two revisions of the Dietary Guidelines saw the transformation from the MyPyramid “meat and beans group” to the MyPlate “protein foods group,” a nutrient name rather than a food source. Research suggests that consumers better identify with food source examples rather than nutrient names. The 2015 Dietary Guidelines also came with a new area: sustainable diets. Encouraging the consumption of sustainable food sources, like pulses, is imperative to ensuring a secure, healthy food supply for the U.S. population over time and for future generations. 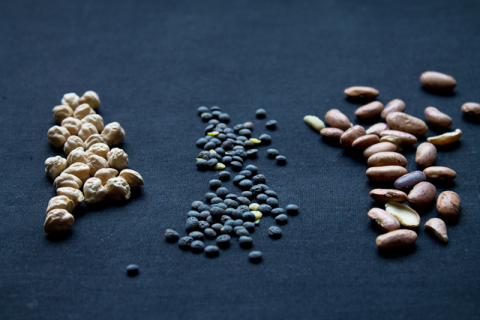