Is a diet low in greenhouse gas emissions a nutritious diet? – Analyses of self-selected diets in the LifeGene study

This research links the self-reported Food Frequency Questionnaire (FFQ) data of Swedish participants, to Life Cycle Assessment (LCA) data of carbon footprint for food products. The results of this study indicate that a self-selected diet low in diet related greenhouse gas emissions (GHGE) provides comparable intake of nutrients as a diet high in GHGE, and adheres to dietary guidelines for most nutrients.

This research used the self-reported diet information from a Swedish population-based pilot study, for a project called ‘LifeGene’, in which a total of 5,364 participants completed an interactive FFQ (that assessed habitual dietary intake of the previous month, as well as meal patterns and eating behaviour), and visited a clinic to have measurements taken. LifeGene is a prospective Swedish cohort study, projected to last 20 years, that seeks to combines modern biotechnology with information on individual’s health and lifestyle.

The diet information collected was then linked to LCA data for 65 food items and food groups representative of typical food consumption in Sweden. The GHGE of the LCA included emissions from agriculture and its inputs, food processing, distribution and retailing.

Adjustments were made for unavoidable food losses (i.e. shell and bone) and avoidable food waste, both before and after preparation, using data from the British Waste Resources Action Programme and a FAO report (that we summarised here). The CO2e for mixed dishes was based on up to three main food products or groups using standard recipes from the Swedish food compositions database – for example, lasagne was based on weighted LCA data from ground meat, milk and tomato, respectively. The nutritional content of the diets was assessed in terms of the Nordic nutritional recommendations (NNR), which set guidelines to “promote good health and prevent major chronic diseases in the Nordic countries” (that you can read about here).

In the results, the researchers calculated ‘crude medians’ of diet related emissions by age and gender. The median CO2e was lower in women than in men, and increased with age for both women and men. The researchers suggested the lower CO2e in women compared to men is because women generally eat less than men overall, as well as gender differences in what type of food is eaten (i.e. men eat more meat).

The main finding was, the group with the lowest CO2e emissions did have adequate intake of most nutrients, and that the intake was comparable with the nutrient intake among people in the highest CO2e emissions: hence the researchers concluded that a diet low in GHGE could be nutritious at the same time. None of the groups were found to have enough intake of vitamin D, which the researchers stated was a common problem in the general population of Sweden. The intake of some important nutrients increase with increasing emissions, but there were only small differences between groups at varying CO2e levels.

This paper is the first to study the relation between CO2e and adherence to NNR in the Swedish population with regards to individual nutrients, and as such, contributes new findings about low GHGE diets based on self-selected diets, as opposed to a simulated dietary scenario.

There are many different ways of looking at the relationship between health and sustainability in a diet. For an overview see Plating up Solutions – see also a paper by Vieux et al which found that self-reported healthier diets are not necessarily lower in GHG emissions than self-reported less healthy diets.

Background: Climate change is an urgent global issue and the food sector is a major contributor to greenhouse gas emissions (GHGE). Here we study if a diet low in GHGE could be a nutritious diet compared to the Nordic Nutrition Recommendations (NNR).

Methods: The environmental impact of foods from Life Cycle Assessment (LCA) data was linked to a food frequency questionnaire (FFQ) filled out by 5,364 participants in the Swedish LifeGene study. Thereafter, we calculated the daily emission of CO2 equivalents (CO2e) as well as the intake of selected nutrients associated with vegetables, fruits, meat and dairy products. The CO2e was divided into quartiles were quartile 1 corresponds to a diet generating the lowest CO2e, and quartile 4 corresponds to a diet with the highest CO2e.

Results: The overall diet-related emission was 4.7 kg CO2e/day and person, corresponding to 1.7 ton CO2e/year. In general, there were only small differences in nutrient intake between groups of varying levels of CO2e, regardless if the intake was analyzed as absolute intake, energy percent or as nutrient density. Moreover, adherence to NNR was high for the group with the lowest CO2e, except for saturated fat where the intake was higher than recommended for all CO2e groups. On the other hand, only the group with the lowest CO2e fulfilled recommended intake of fiber. However, none of the CO2e groups reached the recommended intake of folate and vitamin D.

Conclusions: Here we show that a self-selected diet low in CO2e provides comparable intake of nutrients as a diet high in in CO2e. 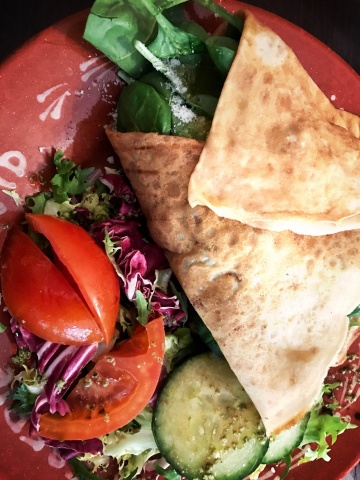