As the climate changes, and food demand increases, crop varieties suited to these conditions need to be developed. The authors of this paper warn that crops yields around the world could fall within a decade unless action is taken to speed up the introduction of new varieties. They propose three ways to improve matching of maize varieties in Africa to a warmed climate: reduce the BDA (the process of breeding, delivery and adoption), breed under elevated temperatures and act to mitigate climate change.

New varieties of maize need between 10-30 years of development before they are ready to be grown by farmers.

The scientists say the lag is a result of a combination of factors including the limited number of crops you can grow in a season, the need for government-approved testing and a number of problems around access to markets that can increase the time it takes before the farmers have the new seeds to plant. The BDA process can also be slowed down by a lack of capacity to develop new strains (lack of access to knowledge or required technology) and social infrastructure (efficiency of public and private seed systems and adoption rate of farmers). This is concerning as the temperature at the time of crop development is likely to different from current temperature conditions. The magnitude of this mismatch varies spatially; with no adaptive measures taken, the crop duration changes (time from germination to maturation) could result in a maximum yield reduction of about 2.5-5% across most of Africa.

This study uses 7 crop-climate indices (metrics that capture the response of crops to single or multiple aspects of weather or climate) to identify heat stress, drought stress and crop duration changes impacting maize in sub-Saharan Africa. There is particular concern in crop duration as, potentially as soon as 2018, there may be significantly different crop durations that will make less use of available rains and solar radiation, which implies reduced yields.

The authors state that increasing the speed of development is important but so is making smarter assumptions about future conditions - using the climate models to tell us what the temperatures are going to be will be key here. Those temperature elevations can then be put into the greenhouses by researchers to breed crops at those temperatures. While this is starting to happen, this paper provides the hard evidence of the necessity of it. The authors state that interventions are needed to reduce the BDA time, such as improved breeding efficiency and infrastructure. Improved efficiency, state-of-the-art technologies, and effective marketing are also key but the paper notes that the costs associated with the bulking and marketing of new seed varieties acts both as a disincentive for high turnover of new products and limit competition from new seed companies. Through coordinated working and partnerships, either in the form of public–private partnerships for technology transfer and development, or the regional sharing of genetic resources and the harmonization of regulations, there is potential for some of these constraints to be overcome.

The development of crop varieties that are better suited to new climatic conditions is vital for future food production. Increases in mean temperature accelerate crop development, resulting in shorter crop durations and reduced time to accumulate biomass and yield. The process of breeding, delivery and adoption (BDA) of new maize varieties can take up to 30 years. Here, we assess for the first time the implications of warming during the BDA process by using five bias-corrected global climate models and four representative concentration pathways with realistic scenarios of maize BDA times in Africa. The results show that the projected difference in temperature between the start and end of the maize BDA cycle results in shorter crop durations that are outside current variability. Both adaptation and mitigation can reduce duration loss. In particular, climate projections have the potential to provide target-elevated temperatures for breeding. Whilst options for reducing BDA time are highly context dependent, common threads include improved recording and sharing of data across regions for the whole BDA cycle, streamlining of regulation, and capacity building. Finally, we show that the results have implications for maize across the tropics, where similar shortening of duration is projected. 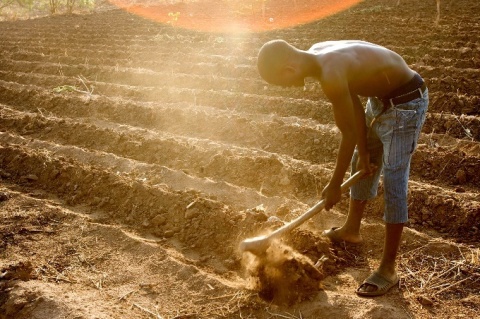