Crop intensification, land use, and on-farm energy-use efficiency during the worldwide spread of the green revolution

This article explains the technological changes behind the three-fold increase in global crop production between 1961 and 2014, i.e. since the Green Revolution. It examines the 58 countries that are responsible for 95% of food production and assesses the impacts of changes in land use, inputs and efficiency.

Human inputs to farms such as fertiliser, machinery and fuel were converted to units of embedded energy using data from FAOSTAT and energy conversion factors. Energy Use Efficiency (EUE) is then defined as the amount of solar energy fixed by crops divided by the total embedded energy of the human inputs. EUE has no units. An EUE of >1 means that the crops capture more solar energy than the total human input energy needed to maintain them. A higher EUE means greater efficiency.

Key findings from the study are:

This article is useful for highlighting the quantitative performance of the Green Revolution. The net increase in land use shows that, despite intensification in many areas, Borlaug’s vision of limiting land expansion through efficiency has not come to pass. This rebound effect, where efficiency leads to higher consumption, is known as the Jevons paradox. One weakness of this study is that it does not account for the energy inputs coming from human labour and draft animals; furthermore, FAOSTAT data probably underestimates contributions from small farms, which are particularly important for some crops such as rice.

We analyzed crop production, physical inputs, and land use at the country level to assess technological changes behind the threefold increase in global crop production from 1961 to 2014. We translated machinery, fuel, and fertilizer to embedded energy units that, when summed up, provided a measure of agricultural intensification (human subsidy per hectare) for crops in the 58 countries responsible for 95% of global production. Worldwide, there was a 137% increase in input use per hectare, reaching 13 EJ, or 2.6% of the world’s primary energy supply, versus only a 10% increase in land use. Intensification was marked in Asia and Latin America, where input-use levels reached those that North America and Europe had in the earlier years of the period; the increase was more accentuated, irrespective of continent, for the 12 countries with mostly irrigated production. Half of the countries (28/58), mainly developed ones, had an average subsidy >5 GJ/ha/y (with fertilizers accounting for 27% in 1961 and 45% in 2014), with most of them (23/28) using about the same area or less than in 1961 (net land sparing of 31 Mha). Most of the remaining countries (24/30 with inputs <5 GJ/ha/y), mainly developing ones, increased their cropped area (net land extensification of 135 Mha). Overall, energy-use efficiency (crop output/inputs) followed a U-shaped trajectory starting at about 3 and finishing close to 4. The prospects of a more sustainable intensification are discussed, and the inadequacy of the land-sparing model expectation of protecting wilderness via intensified agriculture is highlighted.

Pellegrini, P. and Fernández, R.J., 2018. Crop intensification, land use, and on-farm energy-use efficiency during the worldwide spread of the green revolution. Proceedings of the National Academy of Sciences, 115 (10) 2335-2340. 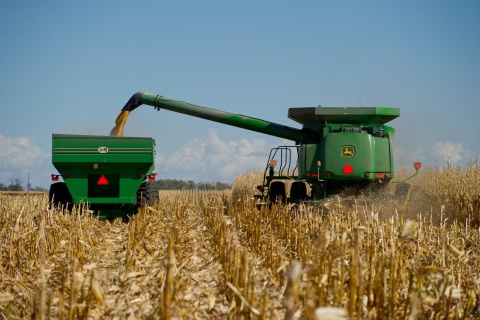