This paper quantifies the climate impacts of phasing out livestock production globally. It finds that ceasing animal agriculture could provide half of the net emissions reductions required to limit climate warming to 2°C, and argues that large cuts in greenhouse gas emissions from food production are likely to be necessary alongside emissions reductions in the transport and energy sectors. Both authors are shareholders of Impossible Foods, which is developing alternatives to livestock.

The paper considers the effects of reducing emissions from animal agriculture - in particular the short-lived greenhouse gases methane and nitrous oxide - as well as the carbon sequestration potential of restoring native biomass in areas currently used for livestock production. It explicitly does not consider the wider challenges - social, economic, nutritional and agricultural - of phasing out livestock production as part of the modelling scenarios. The authors note that in reality these challenges could pose major barriers to the wide-spread adoption of plant-based diets, but take the view that significant climate change could be even more disruptive.

The scenarios modelled include business-as-usual (emissions fixed at 2019 levels), the immediate replacement of all animal agriculture with plant-only diets, a more gradual shift over 15 years to plant-only diets, and several versions of each where only specific animal products are replaced. Emissions from non-food sectors are assumed to remain constant.

As shown in the figure below, the results show that the 15-year phaseout of animal agriculture would pause the ongoing increase in radiative forcing of the atmosphere (its ability to increase the temperature of the planet) for around 30 years; after around 2060, radiative forcing would resume its increase. The pause is due to sustained drops in emissions of methane and nitrous oxide, which lead to drops in the atmospheric concentrations of each, combined with a large one-off uptake in carbon as native biomass grows on land previously used for livestock (this carbon sequestration is assumed to happen linearly over 30 years). Carbon dioxide emissions only drop a small amount in the long term, as livestock farming is found to account for only 4% of today’s CO2 emissions.

The majority of climate benefits from eliminating animal agriculture were found to come from ceasing bovid production (cattle and buffalo), as shown below. The authors note that their business-as-usual scenario is highly conservative, since it assumes fixed emissions at current levels, while in reality demand for animal-based foods is predicted to expand significantly. They calculate that expanding today’s diet in wealthy industrialised countries to the current global population would require additional farmland equivalent to the combined areas of Africa and Australia, with huge impacts on biodiversity and ecosystems. They also argue that if negative emissions technologies such as bioenergy with carbon capture and storage are scaled up as anticipated in IPCC scenarios, the only way to find enough land for their use without causing significant damage is to displace land-intensive ruminant production.

Animal agriculture contributes significantly to global warming through ongoing emissions of the potent greenhouse gases methane and nitrous oxide, and displacement of biomass carbon on the land used to support livestock. However, because estimates of the magnitude of the effect of ending animal agriculture often focus on only one factor, the full potential benefit of a more radical change remains underappreciated. Here we quantify the full “climate opportunity cost” of current global livestock production, by modeling the combined, long-term effects of emission reductions and biomass recovery that would be unlocked by a phaseout of animal agriculture. We show that, even in the absence of any other emission reductions, persistent drops in atmospheric methane and nitrous oxide levels, and slower carbon dioxide accumulation, following a phaseout of livestock production would, through the end of the century, have the same cumulative effect on the warming potential of the atmosphere as a 25 gigaton per year reduction in anthropogenic CO2 emissions, providing half of the net emission reductions necessary to limit warming to 2°C. The magnitude and rapidity of these potential effects should place the reduction or elimination of animal agriculture at the forefront of strategies for averting disastrous climate change. 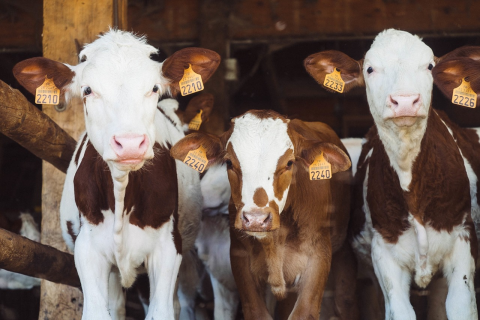