This paper models the impacts that the Paris Agreement on climate change would have on seafood production. It finds that three quarters of maritime countries would benefit from the Agreement’s implementation.

In each case, total fish biomass and maximum catch potential (based on 381 top revenue-generating fish species) are projected based on three interlinked models: a bioclimatic model, an economic model of supply and demand, and a multiplier model to represent the downstream economic impacts of changes in the revenue of fisheries. For example, one dollar’s worth of fish catch is estimated to generate around three dollars of economic activity, e.g. by processors and retailers.

In the 3.5°C scenario, globally, maximum catch potential is 7.3% higher than in the 1.5°C scenario, the revenue of fishers is 7.4% higher, seafood workers’ income is 7.8% higher and household seafood expenditure is 3.2% lower.

The paper points out that the effects of climate change on seafood are likely to be more severe in developing countries, where residents generally have lower greenhouse gas emissions per capita than in developed regions and are relatively reliant on seafood as a source of protein.

The Paris Agreement aims to mitigate the potential impacts of climate change on ecological and social systems. Using an ensemble of climate-marine ecosystem and economic models, we explore the effects of implementing the Agreement on fish, fishers, and seafood consumers worldwide. We find that implementing the Agreement could protect millions of metric tons in annual worldwide catch of top revenue-generating fish species, as well as billions of dollars annually of fishers’ revenues, seafood workers’ income, and household seafood expenditure. Further, our analysis predicts that 75% of maritime countries would benefit from this protection, and that ~90% of this protected catch would occur within the territorial waters of developing countries. Thus, implementing the Paris Agreement could prove to be crucial for the future of the world’s ocean ecosystems and economies.

Read the full paper here. See also the Foodsource resource How might climatic change affect food systems in the future? and the paper Impacts of historical warming on marine fisheries production. 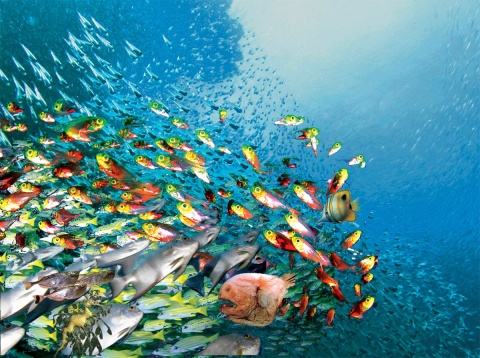