Agriculture and overharvesting are still the main drivers of species loss

In this analysis presented in the journal Nature, four conservation scientists warn against the current trend of over-reporting on climate change’s impacts on biodiversity. Instead, they find that by far the biggest drivers of biodiversity loss are overexploitation (the harvesting of species from the wild at rates that cannot be compensated for by reproduction or regrowth) and agriculture.

The analysis consists of an assessment of threat information gathered for the more than 8,000 species of animal that are considered threatened with extinction on the Red List by the International Union for the Conservation of Nature (IUCN).  Of these species, 72% (6,241) are being overexploited for commerce, recreation or subsistence. A second driver is the expansion and intensification of agricultural activity which is thought to endanger 5,407 species (62% of threatened species). Far fewer species, 19% of those on the Red List, are judged to be threatened by anthropogenic climate change (including increases in storms, flooding, extreme temperatures or drought that exceed background variability, as well as sea-level rise).

While the authors acknowledge that climate change is likely to become an increasingly dominant problem in the extinction crisis, they emphasise that the impacts of overexploitation and agricultural expansion will also increase due to human development and population growth. They note that media reports and some conservation agencies are paying more and increasing attention to biodiversity and climate change-related issues than they do to the main two drivers. For example, the World Conservation Congress of the International Union for Conservation of Nature (IUCN) to be held next month has following up on the Paris climate agreement high on its agenda.

In response, the authors write:

“It is crucial that the World Conservation Congress delegates — and society in general — ensure that efforts to address climate change do not overshadow more immediate priorities for the survival of the world's flora and fauna.”

Another recent study makes a similiar point, finding found that biodiversity scenarios published in the academic literature mostly focus on the future impacts of climate change and largely neglect changes in land use and land cover.

Limitations to the analysis, as recognised by the authors, include the potentially unjustified separation of threats into discrete drivers. For example, as agriculture is also a major contributor to GHG emissions, it will impact species both directly and indirectly. There is also limited understanding of how threats can act in ways which are additive, synergistic or antagonistic. It is thus difficult to establish for example whether a combination of e.g. temperature increases and habitat loss will lead to extinction where an individual threat would not.

Read the full article here (open access) and coverage of the story on the New Yorker here and the Guardian here.

You can read related research by browsing the following categories of our research library: Biodiversity and ecosystems; Climate change: impacts and Adaptation and through the keyword categories: Ecosystems & ecosystem services; Plant biodiversity; Forest biodiversity; Land use and land use change. 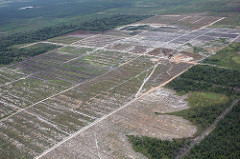