This paper, by researchers from the University of Oxford’s LEAP project, models the climate impacts of beef cattle and cultured meat over the next 1000 years using a climate model that treats carbon dioxide, methane and nitrous oxide separately, instead of using the widespread Global Warming Potential, which assigns a CO2-equivalent value to each greenhouse gas according to warming caused over a specified timeframe.​

The paper uses four different published estimates of greenhouse gas emissions from cultured meat production since, as the technology is still in the early stages, there is much uncertainty over how meat might actually be cultured on a large scale. The first estimate, referred to as cultured-a, assumes that cells are fed on cyanobacteria hydrolysate; estimate cultured-b considers several plant-based feedstocks, including wheat and maize; estimates cultured-c and cultured-d are the average and high results from a paper that assumes a feedstock made from soy and corn starch.

Three different studies are used to represent emissions from beef cattle production: an organic Swedish ranch system, a Brazilian pasture system, and a pasture system in the Midwestern United States. This follows the approach of the paper Pierrehumbert and Eshel (2015), Climate impact of beef: an analysis considering multiple time scales and production methods without use of global warming potentials.

The paper models the climate effects of each scenario.

For CH4 and N2O, the gases were assumed to decay at an exponential rate in the atmosphere,  persisting for a mean lifetime of 12 and 114 years, respectively, with radiative forcing based on an IPCC report. For CH4, stratospheric water vapour amplification and positive ozone feedbacks were also accounted for.

The climate modelling approach is based on the paper Pierrehumbert (2014), Short-Lived Climate Pollution.

The results show that cultured meat emissions, being largely CO2, drive an ongoing increase in warming; beef systems, on the other hand, tend to cause immediate, significant warming from CH4, but after a few decades for CH4 and a few centuries for N2O, the atmospheric concentration of these gases reaches an equilibrium, resulting in slower further warming.

The warming trends of the scenarios where consumption is perpetually very high are illustrated in the figure below. The two most optimistic cultured meat scenarios have lower climate impact than all the cattle systems considered even on the timescale of 1000 years. However, the least optimistic cultured meat scenario (cultured-d), although having a lower conventional carbon footprint (i.e. CO2 equivalent) than all the cattle systems considered here, is outperformed by all three cattle systems within 450 years. 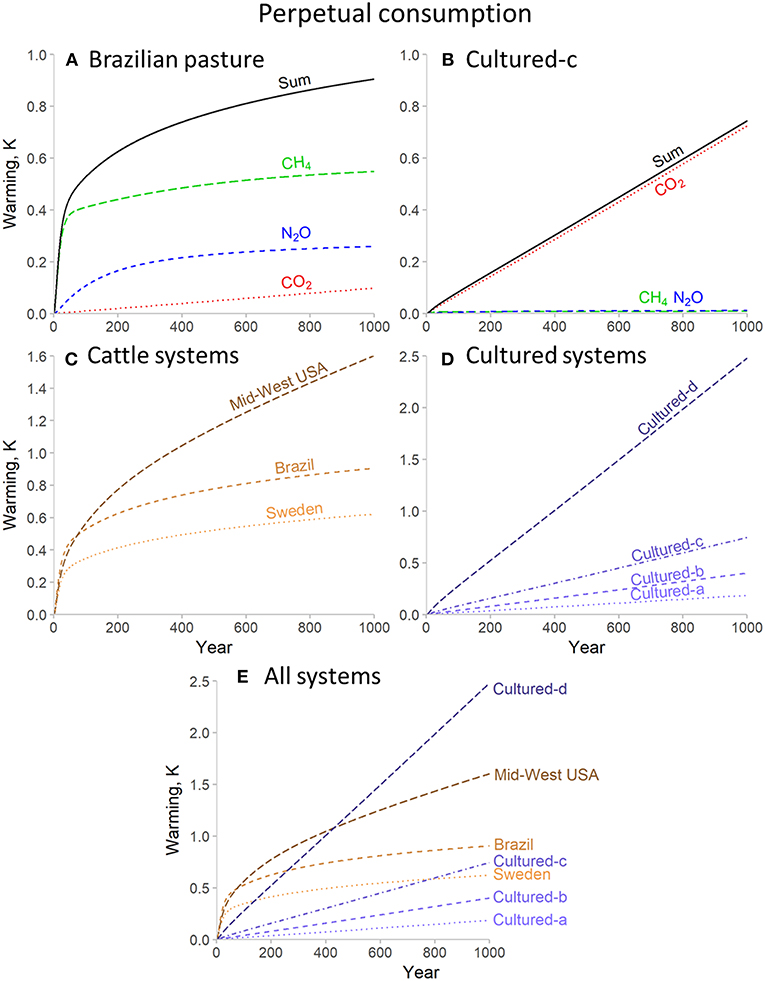 In the case where consumption rises then falls to zero - shown below - the cattle systems produce higher peak warming than the cultured meat systems (except for the cultured-d scenario), but the warming from cattle systems, predominantly from methane and nitrous oxide, declines once emissions decline, while the warming produced by fossil fuel CO2 emissions persists in the long term. This has the result that, after 1000 years, warming is similar between cultured and cattle cases (except for cultured-d, which produces the highest warming after 1000 years). 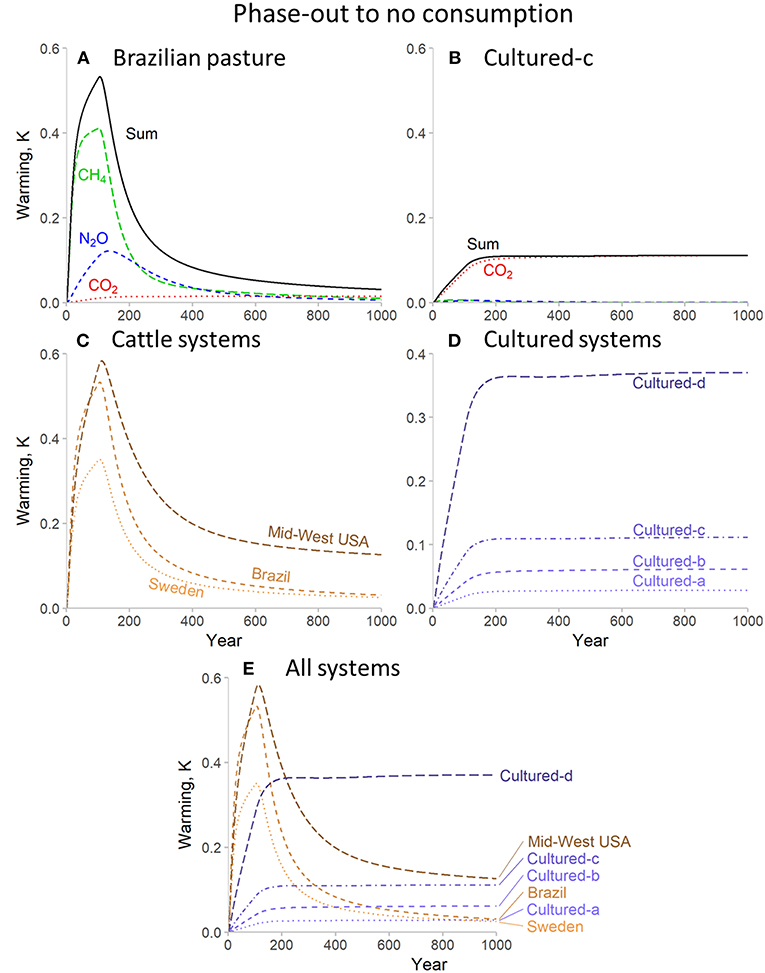 Image: Figure 2, Lynch and Pierrehumbert. Warming impact for consumption at very high rates (250 Mt per year) followed by a decline to zero for beef cattle and cultured meat production systems for 1,000 years. (A,B) illustrate the individual and combined warming impact of separate greenhouse gases for representative beef cattle (A) and cultured (B) systems. (C–E) show total warming impacts for all systems.

The authors comment on their findings: “As originally stated in Pierrehumbert and Eshel (2015), the temperature impacts of very large levels of beef consumption, under any of the systems explored here, are significant and likely incompatible with our climate goals. Despite the bold claims and superior carbon dioxide equivalent footprints, however, cultured meat is not necessarily a more sustainable alternative. In the most optimistic cultured meat production footprints, emissions are competitive with cattle systems for CO2 while avoiding the other gases: this is unambiguously superior from a climate perspective. However, the long-term advantage over cattle is not as dramatic as may be suggested by simple GWP100 comparisons.”

The study notes that land spared by cultured meat production could have climate benefits if it were to reduce deforestation from pasture expansion. However, due to poor standardisation of carbon fluxes associated with land use, these carbon fluxes were not considered in this paper.

The authors conclude “The scale of cattle production required for the very high levels of beef consumption modeled here would result in significant global warming, but it is not yet clear whether cultured meat production would provide a more climatically sustainable alternative. [...] Based on currently available data, cultured production does not necessarily give license for unrestrained meat consumption.”

The paper does not discuss the possibility that near-term climate warming may trigger a climate tipping point, leading to warming likely to be irreversible on human timescales.

Media coverage can be found from the BBC, Wired and Eureka Alert.

Improved greenhouse gas (GHG) emission efficiency of production has been proposed as one of the biggest potential advantages of cultured meat over conventional livestock production systems. Comparisons with beef are typically highlighted, as it is a highly emissions intensive food product. In this study, we present a more rigorous comparison of the potential climate impacts of cultured meat and cattle production than has previously been made. Warming impacts are evaluated using a simple climate model that simulates the different behaviors of carbon dioxide (CO2), methane (CH4), and nitrous oxide (N2O), rather than relying on carbon dioxide equivalent (CO2e) metrics. We compare the temperature impact of beef cattle and cultured meat production at all times to 1,000 years in the future, using four synthetic meat GHG footprints currently available in the literature and three different beef production systems studied in an earlier climate modeling paper. Cattle systems are associated with the production of all three GHGs above, including significant emissions of CH4, while cultured meat emissions are almost entirely CO2 from energy generation. Under continuous high global consumption, cultured meat results in less warming than cattle initially, but this gap narrows in the long term and in some cases cattle production causes far less warming, as CH4 emissions do not accumulate, unlike CO2. We then model a decline in meat consumption to more sustainable levels following high consumption, and show that although cattle systems generally result in greater peak warming than cultured meat, the warming effect declines and stabilizes under the new emission rates of cattle systems, while the CO2 based warming from cultured meat persists and accumulates even under reduced consumption, again overtaking cattle production in some scenarios. We conclude that cultured meat is not prima facie climatically superior to cattle; its relative impact instead depends on the availability of decarbonized energy generation and the specific production systems that are realized.

Read the full paper here. See also the Foodsource resource What are the main GHG contributions to agricultural emissions? and the 2011 paper Environmental Impacts of Cultured Meat Production.