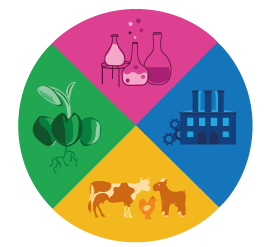 Who is behind “Meat: The Four Futures”?

“Meat: The Four Futures” is initiated by SLU Future Food and run by TABLE, a collaboration between the Swedish University of Agricultural Sciences (SLU), Wageningen University & Research (WUR) and the University of Oxford. The project is funded by a grant from FORMAS (the Swedish Research Council for Sustainable Development).

The podcast is hosted by Matthew Kessler, a project coordinator at TABLE based in Uppsala, Sweden at SLU, who has a complicated relationship with meat. He has spent years working on farms and in kitchens raising animals and cooking meat, as well as many years not eating any animal products. He is also the co-host and editor of the Feed podcast that is in conversation with a range of people who have different ideas about how to transform the food system.

The podcast and project are supported by a big team including TABLE staff and other collaborators throughout the three universities and beyond.

Where can I listen to the podcast?

You can find episodes of “Meat: The Four Futures”, starting in November, wherever you listen to podcasts.

You will also be able to stream the full episodes from our website.

How did you decide who to speak to for the podcast?

We wanted to have a pretty diverse representation of speakers. Diversity when it comes to sectors, viewpoints, geography, and life background. It was important for us to talk to farmers, advocacy groups and scientists all in the same episode to understand the complexity of the lived reality, the different motivations and whether the evidence people are drawing from is supported by the scientific literature.

Everyone we’ve talked to has been incredibly generous in sharing their views on an often polarizing topic and we’re very grateful for their time. This is a really big topic with so many angles to explore and it’s impossible to cover everything. However, if you find that we had major gaps in who we talked to - let us know, we’d love to hear from you.

This series has been produced by Matthew Kessler with extensive collaboration from the TABLE team. Each episode has been reviewed by researchers at U Oxford, SLU and WUR.

How can I support the show?

The podcast and project resources are entirely open-access and free to share with your friends, colleagues and as educational resources. The best way to support the show is to:

What changed from the Gut Feelings report to the Meat the Four Futures?

There were a few changes, though the main ideas behind the futures remained the same. For starters, the names and taglines changed. Most notably, ‘Livestock on leftovers’ became ‘Less meat’. If animals were only raised in environments that resemble their natural habitat with less imported feed, there would be significantly less production globally. The change of name was to centre calls from many in civil society and scientists (not all) to decrease consumption, while also distinguishing the production from the efficient meat, more intensive systems.

Though the report was written back in 2015, the debates and framing seem just as relevant today

Can I be featured on the podcast?

So far, “Meat: The Four Futures” is a limited series of just 8 episodes, most of which have already been recorded. However, we are already working on extra content - including an episode called “listening to the listeners” to hear what you agreed and disagreed with on the series.

If you’re interested in contributing to the podcast, your best bet is to visit our contribute page, where you’ll find details about how to submit short recordings that we may air in future episodes.